What are you looking for?

COHO by Vista Land ties up with UAAP

TODAY’S young generation wants to be “different.” They live life in many dimensions, showing more than just one persona.

Anchored to this trend is a landmark partnership between COHO by Vista Land, the newest brand of the Philippines’ largest homebuilders and one of the leading integrated property developers, and the University Athletics Association of the Philippines (UAAP), which is undeniably the nation’s most popular inter-university sports association.

“This valuable coming together with undisputedly the Philippines’ most popular and most followed league for collegiate sports is a big break for COHO to showcase what we have in store to our target market of young professionals, starting families and, of course, discerning investors,” COHO by Vista Land Operations Head Jennifer Dela Cruz said during the ceremonial signing of COHO’s corporate sponsorship of UAAP 82 Men’s Basketball Tournament held recently at the Mella Hotel in Las Piñas City. Complementing the theme of the league’s new season, #ALLFORMORE that stands for “Greater Excellence and Transcendence Towards One’s Self Realization”, she explained that COHO is all about empowering people to live the life that they dream of living and become the best person that they can ever be.

“At COHO, one can create his and her beautiul lifestyle. Together, we agree that we are #ALLFORMOREBEAUTIFULLIFESTYLES,” Dela Cruz said.

This formidable alliance in the history of COHO, Vista Land and the Villar Group, as well as that of the UAAP and it’s home network ABS-CBN Sports+Action combines their synergies as highly-esteemed institutions.

“We’re very, very happy to have this partnership because we think there is a sharing of our common values,” said Vince Rodriguez, channel and production head at ABS-CBN Sports+Action.

The 82nd edition of UAAP will be more than just a league, showing not only the same intense games, but also the kind of lifestyle the athletes have. Since they are at the prime of their youth, this season will also tell their stories off the court as a normal people—active, tech savvy and well-rounded. 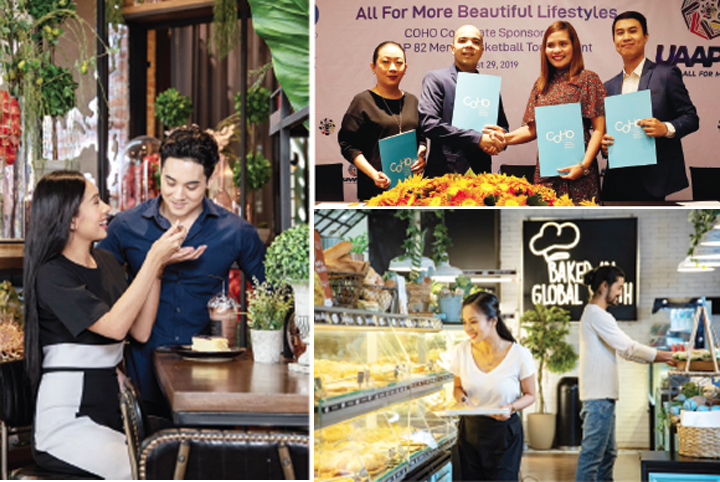 “They’re students. They’re kids. They’re sons and daughters [of their parents]. Some of them have their own small businesses while they’re studying and playing the games. Some of them have other interests aside from sports,” he said. “So this is what we want to show. And I think COHO will help us to be able to show that these athletes are multifaceted. They have lifestyles, too, outside of the court.”

Beyond seeing them in their natural habitat, the partnership also aims to highlight how they go out of their comfort zone and exceed what is expected of them.

COHO’s sponsorship on the UAAP forms part of its strategies to raise awareness on its thrust to seamlessly marry the style and vibrance of condo living with all the convenient amenities of a home.

“We’ll be engaging our viewers, their market, with on-air values for the brand, and also on ground,” ABS-CBN Sports+Action Sales Head Nicole M. Moro shared. “Apart from that, we have special segments within our magazine show ‘Upfront’ to feature other [COHO] properties and, probably, Coffee Project as a venue for our shows.”

Seeing the success of this initiative, the mid-rise condominium developer unit of Vista Land plans to collaborate more with other influential organizations.

According to COHO by Vista Land Corporate Communications Head Jan Christopher Gonzales, the track that the brand is taking is not to promote their projects in a hard sell fashion, but through the lifestyle they provide to empower their existing and future residents.

“What we’re saying is at COHO the experience is elevated. It’s a different lifestyle altogether. Beyond the functional amenities of a condominium, COHO is able to go beyond that because we are banking on the synergy that we have from the masterplanned developments of Vista Land that we call ‘Communicities,’” he said.

“Vista Land is an integrated property developer, meaning, we don’t just build the residential components of the community. We also build the commercial, retail, offices, leisure and hotels to provide an overall enriching residential experience to our buyers and property owners,” Gonzales stressed.

COHO is short for “Condo Homes”. In just a year since its inception, it has already built its presence in 25 highly urbanized locations across the country.

Established in 1938, the UAAP is one of the oldest athletic conferences in the country. It is home to eight member universities that compete in three divisions (Seniors’, Juniors’, and Women’s) in fourteen sports.

What are you looking for?